These videos will allow you to learn more about WHY we are encouraging all parents to consider home
school and private Christian school as the alternative to the government run education system.
FEATURED VIDEOS

“The Children’s Story came into being that day.  It was then that I realized how completely vulnerable my child’s mind was—any mind for that matter—under controlled circumstances.

Normally I write and re write and re-write, but this story came quickly—almost by itself.  Barely three words were changed.  It pleases me greatly because it keeps asking me questions….

Questions like what’s the use of “I pledge allegiance” without understanding?  Like why is it so easy to divert thoughts and implant others?  Like what is freedom and why is it so hard to explain?

The Children’s Story keeps asking me all sorts of questions I cannot answer.

Perhaps you can—-then your child will….”       James Clavell, The Children’s Story

Written and Directed by Neel Kolhatkar

Modern Educayshun delves into the potential dangers of our increasingly reactionary culture bred by social media and political correctness. 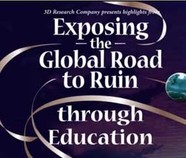 The Global Road to Ruin through Education   2 Day Conference with 12 speakers.  You will get an overview of current education problems and policies delivered by researchers who have tracked this process for over 40 years!

Veteran educators discuss why “public” schools should be abandoned. It is NOT just about Common Core State Standards. Former central office administrator, Dr. Carol Thom, interviewed retired teacher (and former school board member) Betty Jarvis and retired teacher (and former principal) Karl Priest.  Public schools cannot be redeemed. Saying we should not abandon them is like saying the passengers of the Titanic should have stayed aboard because the band was playing good music and the captain was a good man. The only hope for America is to get our children out of the indoctrination centers (i.e. “public” schools).

A Tennessee father’s eyes are opened when he learns just what his daughter is being taught about Islam in her public school.  This father took the time to carefully research the textbook.  This video is a result of those findings.

Retired school teacher/principal, Karl Priest, spoke at Hurricane Bible Church, Hurricane, WV. He lays out the truth of how our children are not allowed to excel in the “one size fits all” government schools.   Many school teachers are also victims as they must conform to the state objectives.  (1 hour)

Dr. Pesta decided to teach in a local public high school that was implementing Common Core Standards. Later he had many of those same students in his college courses. He said that those who had been taught under the CCS were definitely inferior students to those coming out of the other Wisconsin schools. As an English professor who is concerned about students’ K-12 backgrounds, Dr. Pesta has also gone through over 100 English Language Arts Common Core textbooks. He testified that they are filled with the Exemplar texts and authors found in the Common Core Standards.

Freedom Project exists to empower Americans to understand, enjoy, and preserve the freedom and moral responsibility embodied in America’s founding principles through education.

Common Core State Standards – Will You Be Assimilated?

This is a general overview of the Common Core State Standards covering their genesis, the cost, Race to the Top, the Standards themselves and finally how they will affect home schoolers. Though eRate and school bonds are discussed, ROPE completely understands and appreciates the position of rural schools who have been given an unfunded mandate to comply with the law of the Common Core. They simply do what they have to do to stay in compliance. This talk also details how Republicans have gotten behind this movement and are doing so even though the majority of the party is not in favor of the Standards.(25 minutes)

Common Core State Standards; What Do They Mean To You?

This is an overview of the Common Core State Standards from the mythology that they were ‘state led’ to the interesting notion that David Coleman himself wrote the standards and then ‘sold’ them to patsy Republicans. Data collection is also covered. (40 minutes)

A brief history of public education from the beginning of the 1900’s to now – particularly in the area of creation of public school curriculum standards. A video of the presentation we give from our paper of the same name, this piece of research provides much of the genesis for the types public school ‘reform’ we are currently seeing. Sadly, public education has gone from the practice of educating children in order for them to read the Bible and learn about the founding of our great country, to the practices of educating children by the collective, for the collective, of the collective. Children as workers…isn’t that what Marx desired? (1 hour, 15 minutes)

Psychology and Indoctrination: The Destruction of Critical Thinking of Public Schools

This powerful video will help you understand what the public school systems are planning for the children and how they are teaching about death, self-medicating, and psychological indoctrination at the elementary levels. Suicides and violence are on the rise due to psychological drugs being given to children and the indoctrination that is reversing what the parents have taught their children. Parents must take a stand now to save our children from a tyrannical education system that is locking our children’s minds into suicide, drug addiction, and hopelessness. (12 minutes)

Valedictorian Speaks Out Against Schooling (12 minutes)

The Origins of the American Education System

In the 1830’s, American Lawmaker Horace Mann visited Prussia and researched its education methodology. He was infatuated with the emperor’s method of eliminating free thought from his subjects and designed an education system for Massachusetts directly based on these concepts. The movement then quickly spread nationally.
Horace Mann said, “The State is the father of children.”

Do you want your children growing up in total submission to the State?

What are the Public Schools Teaching Our Children?

Pastor Tim Delello warns parents about what their children are exposed to in public schools. Some schools may be safer than others, but the education philosophy is enmeshed in EVERY school in our nation. The messages are contrary to the word of God. Anti-family, anti-Christian, anti-American, pro-homosexuality taught along with sex education starting in kindergarten. (2 hours, 30 minutes)

Brigitte Gabriel – ACT for America founder speaks at anti-Shariah conference about the textbooks that promote Islam. Gabriel explains WHY good Christian children are turning against America and becoming “home grown terrorists”and join the Muslim Brotherhood.Gabriel shows the textbooks that are promoting pro-Islam while criticizing Christianity and America. (14 minutes)

M.J. McDermott is speaking about the current state of the “fuzzy and new” math education. (15 minutes)

Onslaught on Education
Long-time education professional Ezola Foster discusses the problems in education. Ezola was teaching elementary school in 1965 in inner city Los Angeles when the first ESEA was passed during Johnson’s “war on poverty.” Replacing the proven reading of phonics with the unproven whole language caused illiteracy rates to soar. (54 minutes)

Charlotte Thompson Iserbyt served as the head of policy at the Department of Education during the first administration of Ronald Reagan. While working there she discovered a long term strategic plan by the tax exempt foundations to transform America from a nation of rugged individualists and problem solvers to a country of servile, brainwashed minions who simply regurgitate whatever they’re told. Part one of our exclusive interview with Iserbyt breaks down how conditioning/training under a corporate agenda has replaced traditional education, leading to a deliberate dumbing down of Americans. Iserbyt further explains how Reagan signed agreements merging the U.S. and Soviet systems under the United Nations banner, turning over education and many other areas of public policy to global control. This 74 minute exposé is a must see for anyone who wants to truly know why the education system is deliberately crafted to produce human drones with no critical thinking whose only skills are to be subservient, trust authority and follow orders. (1 hour, 14 minutes)

Norman Dodd Revealing The Tax Exempt Foundation Agenda in 1982.
Norman Dodd was chief investigator of the REECE COMMITTEE, set up to investigate the FORD, CARNEGIE, and ROCKEFELLER FOUNDATIONS. His findings were so shocking that the Reece Committee Report was hushed up and it was removed from public view.