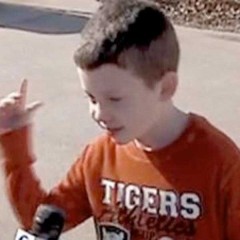 -Students are being suspended from school for simply making gun gestures with their hands. (Link)

Utah 15-year-old suspended after dying her hair a ‘distracting’ red
Rylee MacKay learned last week she was in violation of a Hurricane Middle School policy that hair ‘should be within the spectrum of color that grows naturally.’

-Public schools in some parts of the country are beginning to use RFID microchips to track school attendance. (Link)

-Some public schools are now systematically monitoring the social media accounts of their students. (Link)

-Listening devices are being installed in classrooms all over the nation. (Link)

-Bureaucratic control freaks are checking student lunches at many schools to ensure that they are “balanced”. (Link)

-Some public schools do not even allow parents to walk their own children to class. (Link)

–A few years ago, a class of 3rd grade students at one Kentucky elementary school were searched by a group of teachers after 5 dollars went missing.  During the search the students were actually required to remove their shoes and their socks.

–A teenager in suburban Dallas was forced to take on a part-time job after being ticketed for using bad language in one high school classroom.  The original ticket was for $340, but additional fees have raised the total bill to $637. 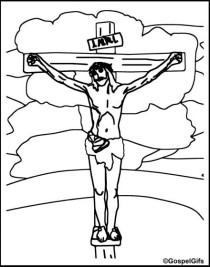 –Back in 2009, one 8 year old boy in Massachusetts was sent home from school and was forced to undergo a psychological evaluation because he drew a picture of Jesus on the cross.

–A 6 year old girl in Florida was handcuffed and sent to a mental facility after throwing temper tantrums at her elementary school.

–The U.S. Department of Agriculture is spending huge amounts of money to install surveillance cameras in the cafeterias of public schools so that government control freaks can closely monitor what our children are eating.

–In early 2010, a 12 year old girl in New York was arrested by police and marched out of her school in handcuffs just because she doodled on her desk. “I love my friends Abby and Faith” was what she reportedly wrote on her desk.

–There are actually some public schools in the United States that are so paranoid that they have actually installed cameras in student bathrooms.

-The Florida State Department of Juvenile Justice has announced that it will begin using analysis software to predict crime by young delinquents and will place “potential offenders” in specific prevention and education programs.

-A group of high school students made national headlines a while back when they revealed that they were ordered by a security guard to stop singing the national anthem during a visit to the Lincoln Memorial.

–In some U.S. schools, armed cops accompanied by police dogs actually conduct surprise raids with their guns drawn.  In this video, you can actually see police officers aiming their guns at school children as the students are lined up facing the wall.

–A 17 year-old honor student in North Carolina named Ashley Smithwick accidentally took her father’s lunch with her to school.  It contained a small paring knife which he would use to slice up apples.  So what happened to this standout student when the school discovered this?  The school suspended her for the rest of the year and the police charged her with a misdemeanor. 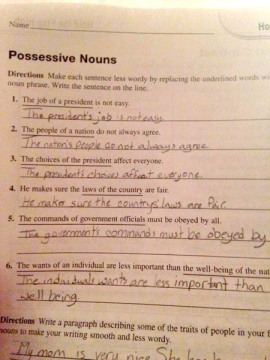 School Test Teaches Kids: “Commands of Government Officials Must Be Obeyed By All”

A parent of a ten year old was shocked to discover a grammar and writing test paper that their child brought home from school reads more like document from an authoritarian country such as China.

The paper uses such sentences and asks school children to replace certain words in order to make the sentence contain a possessive noun.

Others within the paper include:

“The job of a president is not easy.”

“He makes sure the laws of the country are fair”

Upon further investigation it appears that the paper is part of a set produced by Pearson Education, a global corporation that provides education publishing and assessment services to schools in the US and the rest of the world. Pearson is the world’s largest for-profit education business.

Schools are TEACHING OUR CHILDREN TO “OBEY” THE GOVERNMENT

For decades our schools have conducted safety drills to help our children understand what to do in the emergency events such as an oncoming tornado or in case of a fire. These are drills to protect our children from danger.   Below is the latest in “safety drills” that our schools are implementing.  But, unlike drills to protect our children from harm, these are drills for Police Officer training response AFTER our children have been killed or injured following a mass school shooting event.  These drills funded by the federal Dept. of Homeland Security often include loading the children into schoolbuses and driving them to locations undisclosed even to parents. First issue that comes to mind is why are we sending children to facilities where the likelihood of a shooting event is so high that the local police feel it important to train for response?  Secondly… Parents, even if you don’t feel your children’s school is at risk for a Sandy Hook type incident, do you want your children trained to obey a stranger dressed in a uniform who orders them to get into a vehicle or bus without parental permission or knowledge?

Our children are the future of America, and our public schools are systematically training them to become accustomed to living in a “Big Brother” police state. All across the United States today, public schools have essentially become “prison grids” that are run by control freaks that are absolutely obsessed with micromanaging the lives of their students down to the smallest detail.

As you read above, students all over the country are now being monitored by RFID microchips, their lunches are being inspected on a daily basis by school administrators, and the social media accounts of students are being constantly monitored even when they are at home.  Of course these sorts of things do not happen everywhere just yet, but on the path that we are on it is just a matter of time.  At this point, many of our public schools very closely resemble “totalitarian dictatorships”, and so if the United States ever slips into totalitarianism the students of today will actually feel very comfortable under that political system.

Sadly, things have gone downhill quite a bit since those days.  For example, one thing that was unheard of back when I was in high school was “active shooter drills”.  They are being held in school districts all over the nation today, and they often involve the firing of blanks and the use of fake blood.  The following is from an NBC News report about these drills…

In a cramped, carpeted amphitheater in the basement of Troy Buchanan High School, 69 students are waiting to die.

“You’ll know when it pops off,” says Robert Bowen, the school’s campus police officer. “If you get engaged with one of the shooters, you’ll know it.”

“When you get shot, you need to close your fingers and keep ‘em in,” adds Tammy Kozinski, the drama teacher. “When the bad guy and the police come through, they’ll step all over you, and who will be saying they’re sorry?”

“Nobody!” the students cry in unison.

This isn’t a bizarre, premeditated mass murder or some twisted sacrifice led by a student cult. These are the 20 minutes preceding an active shooter drill, the 13th one Missouri’s Lincoln County school district has staged in the past year.

You can read the rest of that article right here, and a YouTube video about these drills.

Fortunately, the students participating in the active shooter drills in Missouri knew in advance what was happening.

In other instances around the country, that is not the case.  In fact, sometimes teachers are not even told what is going to happen.  Just check out the following example from New Jersey…

About 50 teachers at a New Jersey school experienced a terrifying moment when a shooting rampage turned out to be a drill, but the teachers didn’t know it.

A man burst into the library and started shooting. But the gun didn’t have any bullets, just blanks.

“People are crying. The girl next to me is trembling and shaking. You heard people crying. You heard other people praying. It was pretty dramatic,” one teacher said.

Could you imagine your own children being put through something so traumatic?

Are you starting to get the big picture?

Our public schools are systematically training our children for life in a police state, and hardly anyone is complaining about it.

We are heading down a very dangerous road, and at the end of that road we would end up like other totalitarian regimes such as North Korea.

If you think that you would like to live in a truly totalitarian regime, just consider what this UN report says is going on in North Korea right now…

The commission documents crimes against humanity, including “extermination, murder, enslavement, torture, imprisonment, rape, forced abortions and other sexual violence, persecution on political, religious, racial and gender grounds, the forcible transfer of populations, the enforced disappearance of persons and the inhumane act of knowingly causing prolonged starvation.”

So why don’t the people of North Korea rebel?

Well, one prison camp survivor that escaped said that “we became so used to it that we didn’t feel anything”…

One witness, a survivor of a North Korean prison camp, told the commission of seeing a guard beat a nearly starving woman who had recently given birth, then force the woman to drown her baby.

Others told of being imprisoned for watching soap operas, trying to find food for their families, traveling without permission or having family members considered suspect by the government.

Perhaps you think that such a thing could never happen in America, but the truth is that we are also becoming very accustomed to the emerging Big Brother control grid which is being constructed all around us.