The word banned itself causes people to focus on the concept that something is going to be taken away from them, rather than causing them to consider the content or inappropriateness of much of the  ‘literature’ today.

The American Library Association even has a store in which librarians and others can purchase books, posters, badges, bookmarks and tee shirts promoting this yearly observance. A poster yields the ALA sixteen dollars and a tee shirt twenty three dollars.

This year Sonoma State University Library will be participating in this 34th annual Banned Books Week event. Their theme this year is censorship of comics and graphic novels. The Hartford, Connecticut Library is marking Banned Books Week with a Look at the Comic Book Scare.

Comic books are referred to as graphic novels these days. Remember The Boxcar Children Series by Gertrude Chandler Warner? The second book in the series, Surprise Island, was published in 1949. I have an old hardback copy with About the Book pages in the back. It states that this book has a smaller vocabulary load than many second-grade readers. However, this book that was formerly considered second grade material is now listed by Accelerated Reader at a fourth-grade, second month reading level. This book contains 22,923 words. In 2009, the graphic novel of this young children’s book was published.

Despite the obvious continual dumbing down of our children, are there other concerns about graphic novels? Are many of them violent, profane, or sexual in nature? Obviously someone is complaining or we would not see a university or a large city library going to such lengths to defend graphic novels during Banned Book Week. 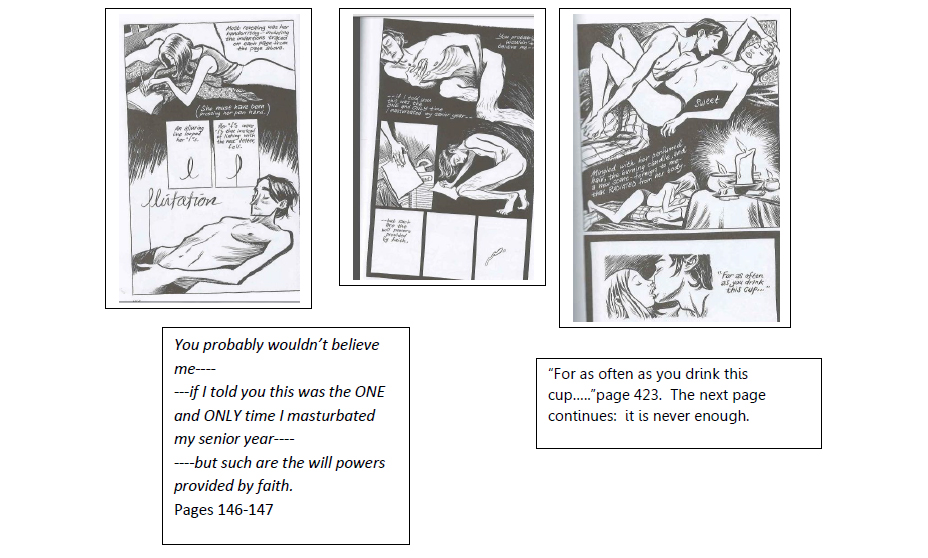 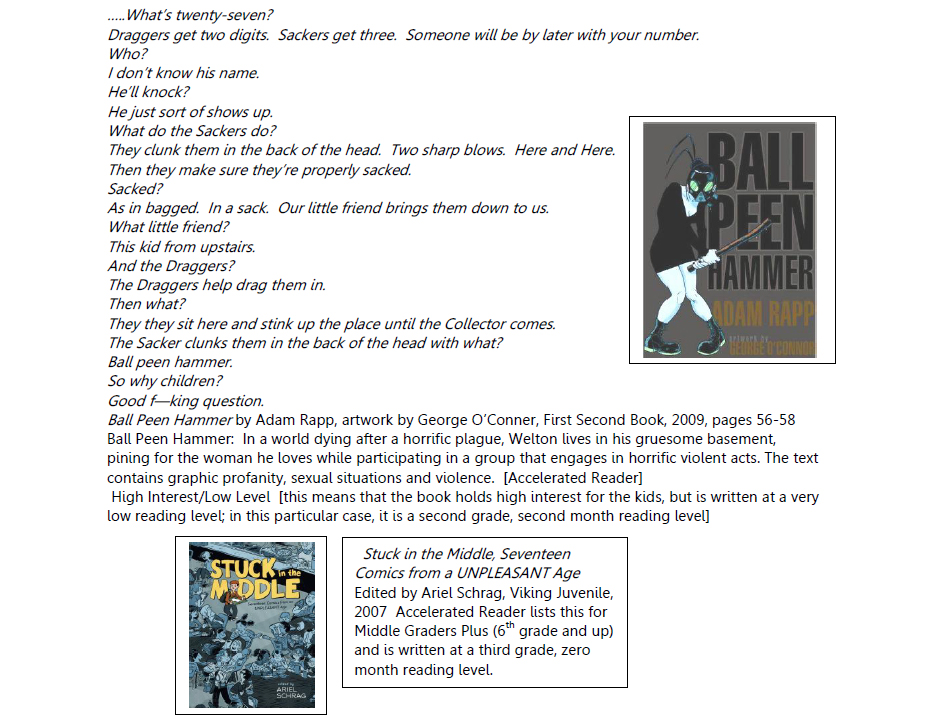 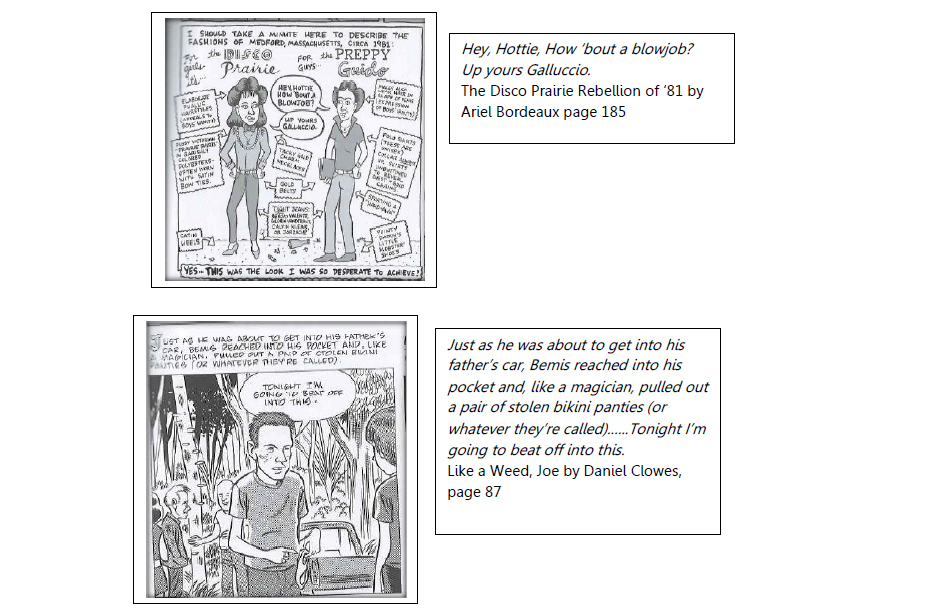 Stuck in the Middle: This anthology of illustrated tales presents the agonies and triumphs of seventh and eighth graders and features some of America’s leading graphic novelists. The text and pictures contain profanity and sexual references. [Accelerated Reader]

No one is questioning whether or not a bomb was dropped on Hiroshima, nor the horrific aftermath. However, how would a young child process this? Most children have been taught very little history and most likely are unfamiliar with Hiroshima. Parental guidance would be necessary.

The Intermountain Newspaper in Elkins, WV recently printed an article called Library hosts ‘Banned Books Week’. The article, quoting from the ALA site, explains that a ‘challenge’ is an attempt to remove or restrict materials, based upon the objections of a person or group. Book challenges “…….are an attempt to remove material from the curriculum or library, thereby restricting the access of others. As such, they are a threat to freedom of speech and choice.” “The library community believes that, as the proprietors of public information, imposing restraints upon the availability of information presents a clear danger to our democracy,” according to the Library Director. The library staff will be wearing “I’m With the Banned” t-shirts and buttons and will be distributing these to patrons during the week. These donations were  “gratefully received” from a World Vision distribution.

Books available for middle and high school children contain a great deal of cursing. After all, these authors and publishers argue that this is how the kids really talk and they want the books to be realistic. Nick and Norah’s Infinite Playlist by Levithan and Cohn contains 275 f-words in a 183 page book.

Conner was on his bed, with Dana. He was lying on his back and Dana was straddling his hips, facing away from him, her hands gripping his knees as she rocked back and forth, up and down into him, or Conner into her……..Conner just watched me, grinning confidently, his arms folded behind his head like he was lounging in a hammock. He said, “Are you going to just stand there and watch, or do you want to hop in here and have some fun with us? Dana’s totally cool with that.” [The Marbury Lens by Andrew Smith, pages 12-13, a Feiwel and Friends Book (an imprint of Macmillan), 2010; this book is listed for Upper Grades and is written on a fourth grade, fourth month reading level.]

Andrew Smith also contributed to an anthology called Losing It written by ten well-known authors. The subject? Ten of the world’s most acclaimed authors offer their perspectives in this daring and unashamed anthology about losing it. Losing their virginity, of course. Accelerated Reader describes the book this way: Covering everything from purity rings to honor killings, these ten stories about teens losing their virginity are funny, moving, haunting, and harrowing, but they all have one thing in common: the first time. The plots contain sexual language. No kidding!

O’Leary, member of a rock band, meets college-bound Norah Silverberg and asks her to be his girlfriend for five minutes in order to avoid his ex-sweetheart. There is nothing in this description that even hints at the profanity, not to mention the sexuality. The American Library Association recommended Blankets,

Persepolis, Anya’s Ghost , Marbury Lens, and Nick and Norah’s Infinite Playlist. Book descriptions are misleading and recommendations cannot be trusted. Fly on the Wall: How One Girl Saw Everything, by E. Lockhart is a good example.

…I think he’s medium-size, though I don’t have anything to compare it to. It’s floppy and even shrively-looking……It’s nothing like what you’d think when guys are bragging about being well hung, or sticking it in some girl….. it’s ugly and good-looking at the same time…page 86

….a number of them pee in the urinals……they’re not all as fine as Hugh, so pretty soon I get ahold of myself and buzz down to inspect more gherkins…… Some are quite pink, while others are surprisingly brown….And lots of boys are circumcised…..I saw two that still had the foreskin attached, looking like the drawings in the biology textbook….I had always thought of the gherkin part as the main event, but if you see one that’s peeing, or hanging around not doing anything, it’s only part of a larger package….I mean, the balls are there—

and they’re nearly as big as the actual gherkin. Page 88

Parents, isn’t it time that we start asking the right questions? Why are the authors writing these types of books in the first place? Are the editors and publishers looking for and encouraging this type of material for our children? If so, why? Why are the public and school librarians deliberately selecting these books? Why do teachers select such books for required reading? Why are once-respected organizations recommending these books? Are these books on the shelves of your local library? Are they available as free e-book downloads? Why are the children’s books written on such low reading levels? Are these books portraying reality, or creating a new normal?