The SIECUS Circle: A Humanist Revolution is by Claire Chambers. Download this book and read for yourself how a network of organizations have been manipulating our children through propaganda.
The_Siecus_Circle-Claire_Chambers-1977 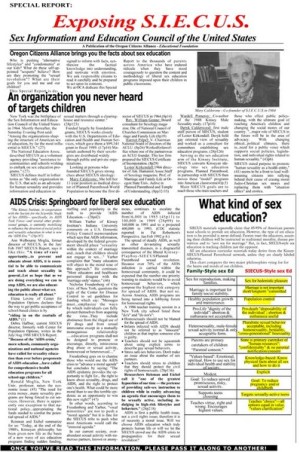 SIECUS Is Morally Molesting Your Children!!

If you have a child attending public school, he or she may be studying sex education curriculum developed by an organization known as SIECUS (Sexuality Information and Education Council of the United States).  SIECUS curriculum promotes to children the ideas that homosexuality, bisexuality, and transsexuality are normal and healthy lifestyles, and that abortion is a convenient and acceptable method of birth control.  Moreover, they are teaching your children that those who disagree with these views – even on religious grounds – are narrow-minded bigots on the fringe of society.  They encourage children to shun the values of their parents if those values contradict those held by SIECUS.  SIECUS is a 38-year-old nonprofit organization whose sex education guidelines have been endorsed by the Centers for Disease Control and Prevention (CDC) for use in public schools. Their sex education does not just target children who have reached puberty, but rather is targeted towards children as young as five years of age! Read more…

Abusing Children and Calling It Sex Education and Research

Video: “Since its inception, the U.N. has advanced a world-wide program of population control, scientific human breeding, and Darwinism.” — Claire Chambers, The SIECUS Circle: A Humanist Revolution (1977)

This is a terrible thing to say. In order to stabilize world population, we must eliminate 350,000 people per day. It is a horrible thing to say, but it’s just as bad not to say it.” — Jacques Cousteau, UNESCO Courier (November 1991)

Bill Gates speaks on the need for population control.