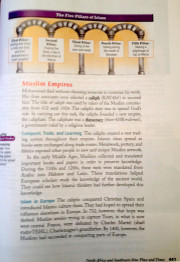 Teaching the 5 Pillars of Islam but not the Ten Commandments

For more than a dozen years, I have been working to expose anti-Christian bias within America’s popular curriculum. But it wasn’t until I ran across a copy of Curriculum Standards for Social Studies,1published by the National Council for the Social Studies under a US Department of Education grant, that I realized the force of law was now driving the agenda.

According to the NCSS standards, “[I]t is clear that the dominant social, economic, cultural and scientific trends that have defined the western world for five centuries are rapidly leading in new directions.”2 The dominant trends that defined Western civilization are of course, the Judeo/Christian worldview. So what does this mean for social studies? The NCSS explains, “The United States and its democracy are constantly evolving and in continuous need of citizens who can adapt… to meet changing circumstances. Meeting that need is the mission of the social studies.” 3

Can it be any clearer? Rather than teach America’s history and founding principles for the preservation of American liberty and Western Civilization, the new mission of social studies is to prepare our children to accept the transformation of America.

In fact, the NCSS are missionaries of a new religion operating in the field of American education. Unlike Christians, these particular missionaries have government backing, free reign with captive children, and operate under the guise of “education” – and thus under the radar of most Christians.

Before building a “new” structure, the “old” must be torn down.

Christianity, the foundation of Western Civilization, must be bulldozed. I find three primary indoctrination methods publishers use to undermine Christianity.

The first is the censorship of America’s true Christian heritage.

The second method I call association propaganda – the linking of negative ideas or events with Christian principles, people, or groups.

Finally contextual redefinition changes the meaning of written text in order tosupport a pre-planned conclusion that is different from the original author’s intention.

There are other subtle methods, but most are variations of these three.

All of these methods of indoctrination have one purpose – to convince our children to reject Biblical Christianity and to accept a secular worldview:  more…. 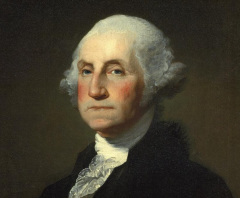 Imagine having your teenager emerge from a U.S. history course with only a vague recognition of the name “George Washington.”

Imagine having your teenager emerge from a U.S. history course with only a vague recognition of the name “George Washington.” Suppose that course mentioned the father of our country with reference to only one speech – no discussion of his military leadership and triumphs, his personal sacrifice to accept the call to become the first President, or his wise and steady leadership during the tumultuous first years of our nation. More….

1. According to McGraw Hill, 9-12 AP, “American Democracy Now”) America is a Democracy not a Constitutional Republic. Truth: Mrs. Eliza Powell asked Ben Franklin in 1787, as he left the Constitutional Convention, “What have you given us?” He replied,”A Republic if you can keep it.” From federal to local governments, every decision made by lawmakers must comply with our Constitution. Not so with a democracy. (A lynch mob is a democracy). In a democracy, whatever the majority decides the minority must endure. Our constitution is designed to protect the minority and the individual. There is not a full explanation of the Constitution in this textbook, but a lot of art work saying we are a Democracy.

2. According to Pearson Education 9-12,”What Should Governments Do?” The Purpose of Government is:

4. According to MacGruder’s American Government and Civics, Pearson Ed. 9-12, “the Soviet Union controlled Eastern Europe for four decades. But by the late 1980s the Soviet Union had severe economic problems and a new leader, Mikhail Gorbachev, was making reforms…By 1989 Czechoslovakia, Hungary, Poland and Romania ended Communist control of their governments and held free elections…”

The truth that was omitted is that there were 56 to 62 million “unnatural deaths” for the USSR overall, with 34 to 49 million under Stalin, Dyadkin, I.G. (Demograficheskaya statistic neyestestvennoy smertnosti v SSSR 1918-1956). Also omitted is that at the war’s end, the Soviet Union adopted a “plunder policy” of physically transporting and relocating east European industrial assets to the Soviet Union. Also omitted is the fact that no experiments in communism/socialism have ever succeeded. China is offered up as an example of success but ao was responsible for over 70 million deaths. (Historians Jung Chang and Jon Halliday)

5. According to “American Government and Politics Today” Houghton, Miffli, Harcourt, 9-12, “…African Americans…feel a sense of injustice…and this feeling is often not apparent to, or appreciated by, the majority of white America.” What?!
Uh, that sounds racist against white people…

According to the above textbook, “The president addressed racial profiling in ways no previous president could when one of the nation’s pre-eminent scholars was arrested…in his own home…

Truth: Police were doing their job protecting a home that appeared to be in the process of a burglary. President Obama said on National TV, “the police acted stupidly.”

6. According to “Psychology in Everday Life” Bedford, Freeman and Worth, “Under the guise of preventing voter fraud, a number of states have adopted laws likely to suppress the vote. Nine states now require government issued photo identification.”

Truth: That first sentence reveals the author’s bias. Fact: An illegal vote cancels your vote. That equals the disenfranchisement of the legal voter. A photo ID is required to board a plane, cash checks, rent anything, obtain a library card, join the YMCA, etc.

7. According to “American Government and Civics” Macgruders Page 758 says, “The number of families on welfare has plunged since the mid-1900s” Truth: There was a 32% increase in welfare spending from 2009 to 2012 alone! Congressional Research Service

8. According to above textbook, page 10, “But what is justice?” The term is difficult to define for justice is a concept, an idea, an invention of the human mind. Like other concepts such as truth, liberty, fairness and justice means what people want it to mean.” Truth: (that last ‘and’ is grammatically incorrect but in the quote) Moral virtues are natural law. The natural law our founding fathers spoke of. In a civilized world, … “It is the doctrine of objective value, the belief that certain attitudes are really true, others really false…” C.S. Lewis from The Abolition of Man

Moral virtues must be learned, therefore they must be taught. With no 10 Commandments, and the teaching of secular humanism, there are no absolutes, therefore, any behavior is permissible.

You can see the rest of the examples at the Textbook Tattler at the website TextbookAdvocates.com.

Guess who wrote these biased Pearson textbooks? “Pearson hired Shabbir Mansuri, and Susan Douglass (a convert to Islam) to review and consult on the material being written for textbooks. One problem is that both of these individuals are associated with the Council for Islamic Education, a front for the Muslim Brotherhood in America.” Story here.