In the above video, Michael J. Chapman, American Heritage Research, connects the “Sustainable Development” dots to education. This video explains how public school curriculum has been hijacked to ensure that a whole generation is ready to accept the collectivist system of government control without a word of protest. Presented at the 2008 Freedom21 National Conference in Dallas, Texas.

Religion as Taught in the Public Schools

…..many public schools have been teaching religion for years without calling it that. In their recent book, Facts Not Fear, Michael Sanera and Jane Shaw studied 100 children’s books on the environment being used in schools. What did they discover? That many of the books advocate a kind of salvation through environmental activism. 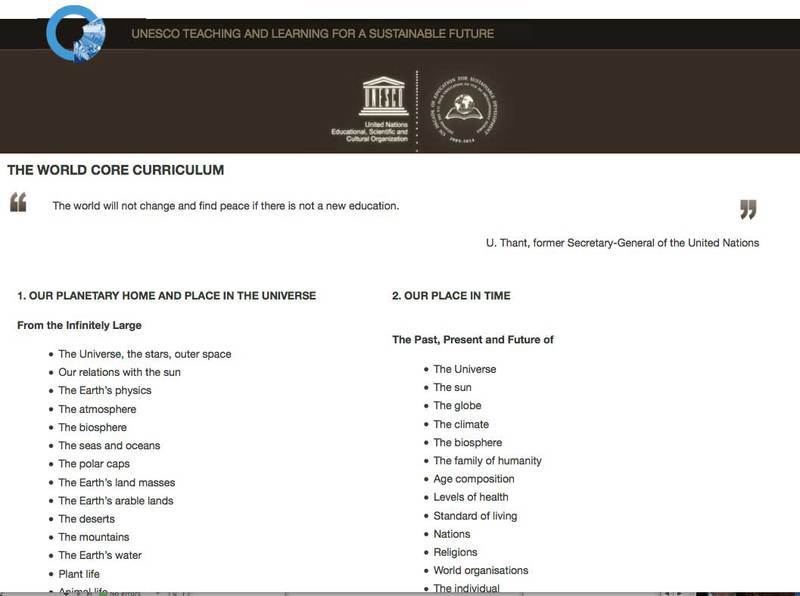 Teaching “Sustainability” is a GLOBAL curriculum.

Robert Muller, assistant Secretary-General at the United Nations created a “World Core Curriculum” and is known throughout the world as the “father of global education”.

Dr. Muller joined the U.N. when it was first forming in the 1940s and devoted the next 40 years of his life behind the scenes at the United Nations focusing his energies on world peace.

Robert Muller (March 11, 1923 – September 20, 2010) was an international civil servant with the United Nations. Assistant Secretary-General for 40 years, his ideas about world government, world peace and spirituality led to the increased representation of religions in the UN, especially of New Age Movement. He was known by some as “the philosopher of the United Nations.” (Wikipedia)

“In the final analysis… the main function of education is to
make children happy, fulfilled, universal human beings.“

“Oneness with the planet”

The International Baccalaureate program is instrumental in changing our children’s values to accept the United Nations global agenda.  The IB is a Non-Governmental Organization (NGO) of the United Nations.  Many schools and school districts have adopted this curriculum 100% into their schools.   Learn more…

Sustainability Education is a central agenda from the United Nations. Initially, it was called “Agenda 21” when written into soft law in 1992 at the Rio Earth Summit. To learn more about Agenda 21 and what it entails, we have provided the following information and links.

Links to informative news articles and essays exposing Agenda 21, “Sustainable Development” and the drive for a UN-administered “global green regime” (i.e. socialist world government):Your Hometown & the United Nations’ Agenda 21
http://www.thenewamerican.com/tech/environment/item/6911
Businesses – and their jobs – are fleeing California at breakneck speed because of costly, even abusive, regulations meant to adhere to UN standards. Is your state next?
Eco-Agenda for Planetary Control
The Earth Summit’s Agenda 21 and other radical proposals — supposedly intended to save “Mother Earth” — will bring untold human suffering and ecological damage.
The UN Attack on Property
Ownership of the fruits of one’s labor is essential to liberty. By its efforts to abolish the right to private property, the UN has shown that it cares nothing for individual freedom.
The Real Agenda Behind UN “Sustainability” Unmasked
Despite Setbacks, UN “Sustainability” Agenda Marches on After Rio+20
UN Sustainability Summit Exposed: Big Business, Dictators, and NGOs
Sustainable Freedom: Surging Opposition to Agenda 21, “Sustainable Development”
Agenda 21 and the Movement Toward a One-World Govt
Agenda 21 Targets Family Farms
Agenda 21: Conspiracy Theory or Threat?
EPA’s Plans for Implementing UN’s Agenda 21
What are the UN’s Agenda 21 and ICLEI?
Habitat II: The UN Plan For Human Settlements
UN Ready to Lead Environmental World Government

Sink the Law of the Sea Treaty!
http://tinyurl.com/cvlxph7

From Rio to Copenhagen: The Earth Summit’s Legacy
http://tinyurl.com/blmp4ah

Maurice Strong: The Most Dangerous Man In The World
http://americanpolicy.org/2012/05/08/the-most-dangerous-man-in-the-world-2/

The UN Is NOT Your Friend
Behind the mask of peace, brotherhood, and universal understanding, the United Nations promotes terror and tyranny in order to achieve its real objective: world government.
http://tinyurl.com/6qacm7e

UN Attack on World Population
To UN family planners, human life is not sacred but is a plague afflicting “Mother Earth” that needs to be cured by coercive population control programs.
http://tinyurl.com/942sxlh

The High Cost of Cap and Trade
http://tinyurl.com/8zfeowm

High and Dry in the Klamath Basin
http://tinyurl.com/d3plcof

Behind the Environmental Lobby
http://tinyurl.com/8q8lzr5