The Separation of Powers vs.

Below are excerpts from this article.  Complete Article

More Educational Resources From This Site

Tyrants fear nothing more than a mature and healthy Judeo-Christian community.  There will never be a secure free market of ideas so long as there is no free enterprise education. To keep that free market of ideas, we must keep government out of education. And the only way to keep government limited to its rightful role as referee is to have a people who themselves are strengthened with a sturdy independence under the law and grace of God — and who can thus hold civil government accountable.

In 1962, the Supreme Court handed down a decision (Engel v. Vitale) that prayer in public schools was in violation of the American Constitution. Their decision had then, and still has, no basis in history or in constitutional law. This was the first decision the Court ever made with not a single precedent cited. That is because there were none to cite. It was a decision flying not only in the face of our documented legal (Supreme Court) history and Constitution but also in the face of any reasonable education system. And, more important, the real problem was not prayer (talking with God) in schools, but government (coercive force) in schools.

Origin of the “Wall”

Contrary to popular misconception, the phrase, “wall between Church and State” does not occur in the Constitution, which reads simply (in the First Amendment):

Congress shall make no law respecting an establishment of religion,
or prohibiting the free exercise thereof.

Thomas Jefferson (who did not help write the Constitution because he was ambassador in France at the time) first used the phrase “wall between Church and State” in an obscure letter in 1802, fifteen years after the writing of the Constitution.

Every single Supreme Court decision relating to Church/State relations right up to the 1940s affirmed, or was compatible with the belief that America historically had always been, and logically could only be, a Christian nation based on Biblical principles, and that the American understanding of political freedom emerged from and was built on those Biblical principles.

1962 was a specific and dramatic break-point for major health indicators in America. Each of the following indicators had been either improving or holding level with population growth. And then in 1962 we saw the following social results:

– Teen crime, in and out of American schools, escalated dramatically during those same three decades, so that crimes in schools almost unheard of fifty years ago are increasingly commonplace, including murder, rape, mugging, extortion, and carrying guns and knives to school;

– So-called “non-directive” modes of teaching, particularly in drug and sex education, have been proven by empirical testing and common sense to produce little effect at great cost, and often produce more, not less, drug use and sexual promiscuity;

– Sexually transmitted diseases, which had been dropping, climbed for 12 straight years to over 3 times pre-1962 levels (and AIDS was yet to come).

– SAT scores, holding level since 1941, began in 1962 an 18 year drop, and have not recovered. In one year, 700,000 high school students graduated who could not read their own diploma. A 1983 government report, A NATION AT RISK, reported that to be the first generation of American children who will not receive an education surpassing their parents. During the 1990’s, America, which had had the best education system in the world, sank to the bottom of educational test results of all the major economically competing countries.

Education has focused on affective and behavioral areas in order to producepolitically acceptable citizens. It has all but abandoned proper teaching of reading, writing, and arithmetic. In the early 1990s, Americans saw banner headlines telling us that 92,000,000 of us (half of the adult population) were functionally illiterate. Boston, in the early 1800s had a literacy rate well over 90%.

Reasonable education aims to set a student free to make practical and moral decisions according to his educated conscience, not to prepare for conformity to a social image constructed by unelected and inaccessible social engineers and bureaucrats.

It is unreasonable and intellectually indefensible to pretend that our religious heritage is unimportant or should not be studied in school.

It is a failure of professional competence and a violation of basic democratic procedure for educators to propose an educational system in which the religious arena (formation of conscience and values) is by law taken over from the churches, synagogues, and families by a mandatory, secular school system.

Such an education is the final takeover by governmental coercive force of the religious arena which is guaranteed a separate and free status by our constitution.

Any reasonable education must therefore equip students to deal with the “religious arena”, that open place of discussion where the great moral and religious issues of life are debated. Reasonable education therefore requires — not that morality and religion be stricken from school curricula — but that the religious and moral traditions of our people be fully discussed, honored, and accurately taught in our schools.

The most important systemic change for good that America could make would be to remove all government influence from education, and to return it fully back to the parents, and to those agencies to whom they choose to entrust their children.

Control follows money. When government takes money away from people through taxation (i.e., at gun point), and then turns around and offers to “help” with that same money, which they now “own”, government will be in charge. The only way parents will be the primary authorities over their children’s education is when either they foot the bill, or they freely choose the source of financial help.

A legitimate pluralism is one in which all views have equal opportunity to develop and express themselves in public debate. Only a free market system is capable of promoting a legitimately “pluralistic” society.

A free-market education system is also necessary to limit government control by run-away bureaucracy and regulatory law, both primary tools of wrongful control of the people.

Why Conservatives Are Completely Wrong On Common Core

Common Core isn’t wrong because of the values it teaches.Common Core is wrong because it is an unconstitutional, federal usurpation of power. In fact, it’s not even directly from the federal government, but a private initiative from the Gates Foundation used by the federal government to coerce states. It is the very same “gun to the head” of the states that Chief Justice Roberts referred to in National Federation Of Independent Business v. Sebelius (Obamacare) with regard to the medicaid expansion coercion. Regardless, conservatives, libertarians, and moderates are all too in favor of such usurpation when it aligns with our values. This is not only wrong, it is extremely dangerous. 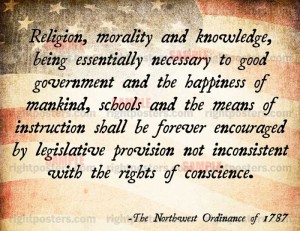 The most important systemic change for good that America could make would be to remove all government influence from education, and to return it fully back to the parents, and to those agencies to whom they choose to entrust their children. Free Market of Ideas, Free Enterprise Education, & the (Real) Wall between Church & State